The old saying “Measure twice, cut once” certainly does not apply to product development because it essentially refers to two failed prototypes. From Estonia’s competitive viewpoint, it is downright criminal how much valuable time engineers and designers have to waste on making all these new prototypes. At the same time, many of us are still unfamiliar with product development that utilises 3D scanning and design modelling that could prevent these issues

Not so long ago, we were contacted by an entrepreneur who was looking for a way to start reproducing glasses they had made before. He was worried as he, unfortunately, had none of his former moulds or drawings available. We were able to find a quick solution: all details of existing glasses were 3D scanned one by one, and during the modelling process the product even received a few upgrades. The glasses were thus designed to have a modern curve and significant functional improvements. New moulds were prepared based on the 3D drawings and at present, the glasses are already in production. This is referred to as reverse engineering, i.e. one of those typical areas where 3D scanning helps give production companies a notable boost in inefficiency. Broken or deformed details are 3D scanned and a 3D model is then created of the object on the computer, which is then followed by a CAD model. The product is further improved if necessary, and the CNC bench will cut the product on site. This exact process was used at Oldbac to make a new and improved crankcase for a Soviet-era go-kart CZ-125 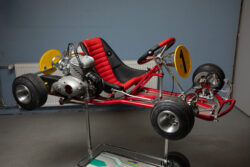 CZ125 is a further development of a Soviet go-kart where the exterior looks like the historical piece, but everything is new on the inside.

Quality control is another area where 3D scanning is being increasingly used. The computer benchmarks the scanned product with the original 3D model. The client then receives a detailed graphical report highlighting any deviations. The report is easy to understand, even for people who are not trained as engineers. Unprescribed elevations are marked with red and depressions in blue. 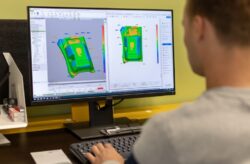 Everyone is able to understand the quality control report where deviations are highlighted in different colours.

Manufacturers of casts as well as fibreglass products (baths, fuel tanks, etc.) are increasingly finding use for 3D scanning. You may have the perfect cast, but fibreglass tends to deform when curing. This was the case for a Swedish company making high-quality hot tub saunas. The internal fibreglass barrel deformed just enough during the curing process that although users were unaware of the difference, the intended form was lost The barrel no longer fit perfectly into the wooden casing. Oldbac prepared a 3D scan of the plastic barrel and just a few hours later the client was able to see exactly what areas had been deformed and to what degree. In this case, there was no need for a new cast since altering the wooden construction did the trick.

3D scanners are not exactly recent inventions and date back as far as the 1960s. True, some of the first examples were awkward and slow, coordinates had to be entered with a digital ruler one reference point at a time. In the 1990s, 3D scanners were picked up by the movie industry and this proved to be a significant boost in their development. The processing capacity of CPUs over the last 10-15 years has revitalised the industry of 3D scanning. A once complex wonder of technology has now become a convenient tool, and in the next 5 years, we can expect 3D scanners to become as commonplace as regular pens when it comes to product development and quality control. In a sense, a 3D scanner is like a small GPS device that maps every reference point on a three-dimensional scale. The scan results in an accurate and realistic view of the visible surface area in its entirety in a simple format that anyone can understand.

Modern professional scanners are remarkably precise and efficient. Professional scanners can measure with an accuracy of 0.025 mm (two and a half hundredths mm!) It maps 1.5 million reference points per second. It takes about 2-3 minutes to scan a pen using a device that looks like a digital double-lens reflex camera. As a rule of thumb, if a person can carry the item it takes about an hour to scan it. This does away with the longstanding idea that 3D scanning is somehow expensive and time-consuming.

Laser scanners for every purpose

3D scanners are categorised based on several criteria, including their principle of operation and intended use. In terms of industry and product development, handheld professional 3D scanners, portable coordinate measurement machines (CMM) and robotic scanners are used most often.

Oldbac imports Creaform 3D Scanners. There were a number of reasons to favour Creaform products. Even though their scanner is designed for professional use (the measuring accuracy of 0.025 mm really speaks for itself), it is easy to use. There is no need to be trained as a metrology engineer or be in a lab setting. 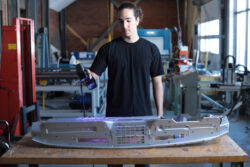 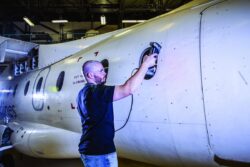 OLDBAC is a company focused on modern product development, which inevitably involves 3D scanning and modelling. So, if a client comes to us with their vision drawn up on a napkin, we can apply to the model and use 3D scans of prefabricated sets (hinges, switches, chips, etc.) to deliver 3D drawings ready for production and even prepare a product milled on our high-performing CNC bench.

We have used this approach to make some very demanding details, such as engine fastening elements for a plane. We have also prepared the 3D models for stainless steel bees mounted on the memorial to victims of communism in Maarjamäe. Specialists at OLDBAC prepared 3D models of real bees from the Estonian Museum of Natural History. The selection came down to three bees and more than 1800 detailed photos were made of each bee to render 3D models. The undercarriage of the self-driving bus of Tallinn University of Technology (TalTech) was also scanned in Oldbac,  This allowed TalTech’s team to model a chassis and determine the best equipment combination (electronics, batteries, etc.) to be positioned inside of the vehicle.
Developing a prototype on the computer has another significant advantage in that it allows a range of analyses such as stress calculations, aerodynamic testing etc., to be performed before advancing to the production stage. Early detection of defects is what makes this method so useful.